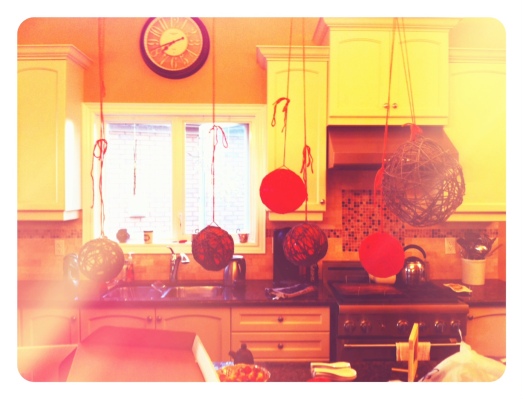 It’s started.  I’ve ventured into the world of Wedding DIY.  I didn’t think I was going to do much… but I think I may have caught the bug.

It started with a post from It’s Simple Love which led me straight to the source – Ruche for what seemed to be a really straight forward How-to.  Blow up a balloon, dunk yarn in glue with water wrap yarn all over balloon, let it harden and enjoy.  Simple enough.

I passed the email along to the Sista and Mom, and asked if they were having visions because I sure was!  Sista responded that she wasn’t having visions so much as flashbacks to when one of our aunts got married and our weekends were suddenly filled with crafting.  In that case painting small plant pots “so that each one is unique and different.”  I remembered it well too, each of us trying to get through as many as possible, not putting too much care or percision into it while my Aunt sat in pre-wedding bliss giving each pot special love and attention.  Did I mention we weren’t old enough to drink?  But of course we were just thrilled to help out!

I tried to entice the Sista with wine – she claimed that barely made it better, but since I’m her only sista and she loves me… she would do whatever I asked (I now have this in writing – muahahaha). I promised I’d make a prototype before we started making 100s.

I bought a starter set of supplies.

I tried a few different sizes.

I waited for them to harden.

I got bored of waiting and tried little tiny ones on sticks.

I carefully untied the balloons. 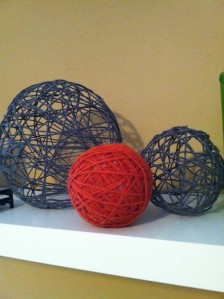 What did you DIY for your wedding? What are some great ideas you’ve seen?